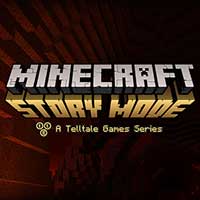 Minecraft: Story Mode is an ongoing episodic point-and-click graphic adventure video game based on the sandbox video gameMinecraft, with the first episode released worldwide in October 2015 for Microsoft Windows, OS X, PlayStation 3, PlayStation 4,PlayStation Vita, Wii U, Xbox 360, Xbox One, Android, and iOS, with subsequent episodes each following a month or two afterwards. The game is being developed by Telltale Games, in association with Mojang, the original developer company of Minecraft.

The game follows the episodic format that Telltale used for its titles The Walking Dead, The Wolf Among Us, Tales from the Borderlands and Game of Thrones The game centers around a new character, named Jesse, who can be either male or female, as they and their allies attempt to save their world by defeating the Witherstorm.

THE ADVENTURE OF A LIFETIME IN THE WORLD OF MINECRAFT**Episode 4: A Block and a Hard Place is now available to download via in-app.**

Minecraft Story Mode – In this five part episodic series, play as either a male or female hero named ‘Jesse,’ and embark on a perilous adventure across the Overworld, through the Nether, to the End, and beyond. You and your friends revere the legendary Order of the Stone: Warrior, Redstone Engineer, Griefer, and Architect; slayers of the Ender Dragon. While at EnderCon in hopes of meeting Gabriel the Warrior, you and your friends discover that something is wrong… something dreadful. Terror is unleashed, and you must set out on a quest to find The Order of the Stone if you are to save your world from oblivion.

The game will run on the following devices but users may experience performance issues: